Democratic Minnesota Rep. Ilhan Omar has sparked controversy and outrage yet again, this time by siding with Russia and communist Cuba alongside the brutal socialist regime of Nicolas Maduro in Venezuela, as she blamed United States policies and sanctions against that nation for all of its current woes.
In an interview Wednesday on far-left media outlet Democracy Now!, Omar was asked for her thoughts on the recent protests and uprising led by U.S.-backed opposition leader Juan Guaido against the oppressive Maduro regime.
“A lot of the policies that we have put in place has kind of helped lead the devastation in Venezuela, and we’ve sort of set the stage for where we are arriving today,” Omar said. “This particular bullying and the use of sanctions to eventually intervene and make regime change really does not help the people of countries like Venezuela, and it certainly does not help and is not in the interest of the United States.”
Vice President Mike Pence initially responded to Omar’s remark with a tweet that pointed out how the congresswoman had essentially chosen to side with violently repressive socialism over freedom and liberty for the downtrodden Venezuelan people.
“As Venezuelans take to the streets to stand for their freedom against an oppressive dictator, Democrat Congresswoman @IlhanMN chooses socialism over freedom. The Trump Administration stands with the freedom-loving people of Venezuela,” Pence tweeted, linking to a tweeted video clip of Omar’s commentary.

Vice President Mike Pence ✔@VP
As Venezuelans take to the streets to stand for their freedom against an oppressive dictator, Democrat Congresswoman @IlhanMN chooses socialism over freedom. The Trump Administration stands with the freedom-loving people of Venezuela.
John Cooper@thejcoop
WOW: @IlhanMN says the U.S. has "helped lead the devastation in #Venezuela," and accuses the U.S. on "bullying" the Maduro regime.

Apparently Maduro's starvation of his people and armored trucks running them over in the streets is not worthy of criticism in her eyes. 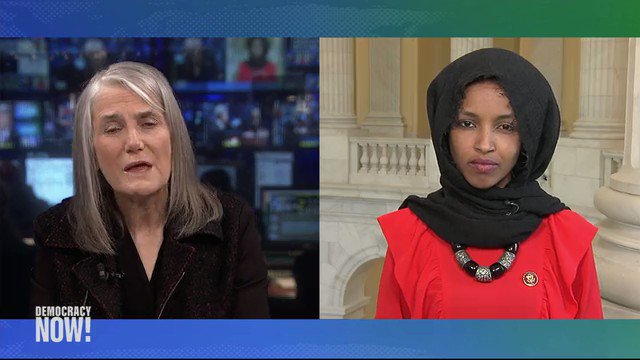 Twitter Ads info and privacy
Pence was not alone in chastising Omar for her absurd assertion that President Trump’s administration was responsible for the devastation and terror that gripped the Venezuelan people, and not the brutal and oppressive socialist regime that had essentially looted and destroyed the once-prosperous South American nation.
The vice president had an opportunity to expound upon his criticism of Omar’s ludicrous worldview when he sat down for an interview in the White House with Fox News host Sandra Smith that aired Friday morning.
About 10 minutes into the interview, Smith shifted gears from the good economic news and other issues such as the Mueller investigation to discuss the current situation in Venezuela, as well as Omar’s commentary.
Asked why he had initially responded to Omar, Pence replied, “Well, because the congresswoman doesn’t know what she is talking about. Nicolas Maduro is a socialist dictator who has taken what was once one of the most prosperous nations in this hemisphere and brought it literally to a level of deprivation and oppression and poverty that we have never seen,” he continued. “Nine out of ten people in Venezuela live in poverty. Three million people have fled Venezuela. That’s not a result of U.S. policies. That’s a result of the dictatorship and socialism that has been imposed on the people of Venezuela by Nicolas Maduro.
“And from early in this administration, President Trump has made it clear that the United States is not going to stand idly by while the people of Venezuela suffer under oppression and dictatorship and socialism. We’ve taken decisive steps and made it clear — Nicolas Maduro has no legitimate claim to power, and Nicolas Maduro must go,” Pence said.
“I couldn’t be more proud of the way President Trump directed our administration to be the first nation on earth to recognize Juan Guaido as the legitimate president of Venezuela,” he added. “Now more than 50 nations have joined us, nations all across this hemisphere, all across the world, are standing with us and we’re going to continue to stand with the legitimate president of Venezuela and with the National Assembly until freedom and democracy are restored.”

Pence added a moment later that it was “absurd” to suggest that U.S. policies and sanctions had played any role in the devastation and suffering that Maduro’s socialist regime imposed years ago.


That should be obvious to anyone who has been paying attention, but apparently it is an unknown for anti-American individuals such as Omar who like to blame their own country for all of the evils and ills in the world, when America has proven to be a life-saving beacon of freedom and opportunity. Omar and her own family of refugees accepted into this great nation from Somalia can personally attest to that fact.
‹
›
Home
View web version