Republicans are demanding that Secretary of State Mike Pompeo turn over a broad scope of unredacted Obama-Biden State Department documents pertaining to the corrupt Ukrainian company that was at the center of the impeachment inquiry earlier this year against President Donald Trump.

In a document sent to Pompeo, Jordan wrote:

“I write regarding documents that the State Department recently released pursuant to the Freedom of Information Act (FOIA),” stated Jordan, in a letter to Pompeo on Thursday. “Although these documents are partially redacted, they appear to shed new light on the actions of State Department employees during the Obama-Biden Administration in relation to the corrupt Ukrainian energy company, Burisma Holdings, and its founder, Mykola Zlochevsky.”
Jordan requested that the information be delivered to the committee by May 28. He asked for:
According to Jordan the State Department documents also reveal that the alleged “whistleblower” who began the partisan impeachment against Trump “also played a role in facilitating the Obama-Biden Administration’s interactions with the Ukrainian government relating to Burisma and Hunter Biden.”
Jordan told Pompeo that the documents reportedly detail “how the ‘whistleblower,’ as a National Security Council (NSC) detailee, hosted a White House meeting that took place with Ukrainian prosecutors in January 2016 regarding a concern that Hunter Biden’s role with Burisma could complicate a potential prosecution of the company’s wrongdoing.”

We first reported on the meeting at the White House involving the suspected fraudulent impeachment whistleblower, Eric Ciaramella, in early November 2019.

According to Stephen McIntyre a demand that Ukrainian top prosecutor Viktor Shokin be fired as a condition for an IMF loan, almost certainly originated with Biden staff.
The demand was first announced to Ukrainian prosecutors at a January 19, 2016 meeting with US officials hosted by Eric Ciaramella. 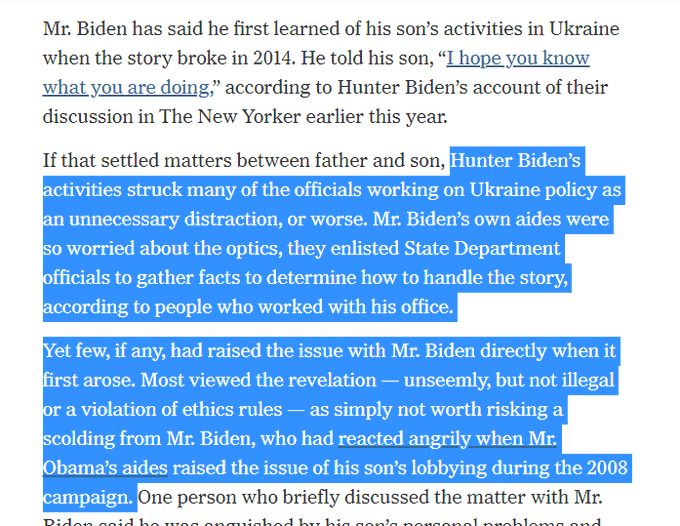 Stephen McIntyre@ClimateAudit
the demand that Shokin be fired as a condition for IMF loan almost certainly originated with Biden staff. The demand was first announced to Ukr prosecutors at Jan 19, 2016 meeting with US officials hosted by Eric Ciaramella.
871
12:52 AM - Nov 12, 2019
Twitter Ads info and privacy

670 people are talking about this
A search on the White House visitor logs during the final year (2016) of the Obama administration lists Eric Ciaramella over 200 times. Ciaramella hosted a meeting with Ukrainian diplomat Andrii Telizhenko on January 19, 2016 in the Obama White House.

And we also discovered that Artem Sytnyk, the director of Ukraine’s National Anti-Corruption Bureau (NABU), a Soros group, who leaked documents on kickbacks to Manafort during the 2016 election, was also at the meeting.

Fool Nelson first reported this on October 12 before Ciaramella was alleged publicly to be the whistleblower.

@FOOL_NELSON
· Oct 11, 2019
Replying to @FOOL_NELSON
h/t to those throwing around this name a week or so ago, including @Larry_Beech and @JackPosobiec. If confirmed, this is just more evidence that the information age has made it so the ruling cabal will never regain it's grip, in that behind every keyboard lies a journalist. #KAG

3,729 people are talking about this

Here’s a guest from the Hudson Institute and Estonia –

(The Hudson Institute promoted a piece by George Soros where he claimed the war on drugs had failed.)
And another from Estonia – And another connection to Soros via USAID – Suren Avanesyan – Soros reportedly received US taxpayer dollars through this agency –
Suren Avanesyan currently serves as Acting Division Chief of the Democracy and Governance Division and Senior Advisor for Rule of Law, Governance and Anti-Corruption in the Bureau for Europe and Eurasia in the United States Agency for International Development (USAID). As Division Chief, he is responsible for managing a team of senior technical advisors, project support staff and for determining strategic direction and priorities of the Democracy and Governance Division.
Here’s Bart M.J. Szewczyk from the Marshall Fund –

About the Marshall Fund – And another connection to the Ukraine – Joseph Wereszynski –

And the Ambassador to Lithuania – And another from the Marshall Fund – Michael Kimmage –

And a lady from Lithuania – Solvita Aboltina – she looks nice – And another from Latvia – What were all these shady individuals from Baltic States and Soros connected entities doing with Eric Ciaramella in Obama’s White House?


Let’s hope Pompeo’s State Department addresses the House request.  If not, then it’s time for Pompeo to go.